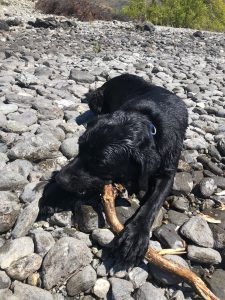 Only 9999 Hours to Greatness

I cut myself with a Smeg knife while attempting to slice an avocado. If that’s not a cliché I don’t know what is. It’s been quite the accident-prone week for me as it happens. I’ve also ended up with grazes on both my knees and all because I forgot to buy coconut milk for the Thai curry.

Realising I was missing this key ingredient at the same time as spotting my son driving off down the driveway, I quickly formulated a plan: sprint across the garden to the edge of the fence, wave son down and get him to pick up coconut milk on his way home. Should have seen the flaw in that plan right from the start.

Seeing me launch out the back door at full pace, the dog decided that something fun was happening and he should come too. I’m not sure if he was aiming for a full tackle but, somehow, we got tangled and next minute I was flat on my face behind the berm, completely hidden from view as my son drove on by completely oblivious to it all.

I’ve replayed this scene a few times in my head and it looks a lot like something from a cheesy comedy. Meanwhile, back in the real world my knees look like a six-year-old’s after a big day in the playground. Not only was it not fun, I still haven’t got any coconut milk.

I shared a photo of my injured knees with my girlfriends via our WhatsApp group. “At least you shaved your legs” they congratulated me.  This is true. And I even did that without cutting myself. Yay me.

Can’t really slack off in the leg shaving department at the moment, it’s shorts weather every day. I’m not complaining about that but the poor dog finds the heat hard work so most afternoons we head down to the lake so he can have a swim. This also sounds fun, but look out, here’s another hazard: me armed with a stick.

Why can’t I throw any more? The dog can’t understand it. He stands looking out to the lake, waiting for the stick to come sailing over his head and taking ages to work out what I’m trying to tell him. Which is that the stick went sideways again.

I can’t understand it either. I’ll have to put it to the WhatsApp girls, but I’m pretty sure I used to be able to throw, back in our school days. Heavy, pointy, dangerous things like shot puts, javelins and a discus. No one died. No one even came remotely close to getting injured at my hand.

Times have changed. Or, if not time, then my hand-eye co-ordination. A while back I managed to throw the stick right into my daughter’s ear. How’s that for precision? 192km2 of lake and I land it in a space no bigger than a couple of centimetres. She’s fine. Ear still working. Big fuss about nothing really. Sorry, honey.

The dog gives up on me in the end. He gets a “Well if you’re not going to do this properly, I can’t really be bothered” look about him and retreats up the beach to chew the un-throwable stick. Pretty harsh. No wonder he thought the new sprint-across-the-garden-game looked like a better option.

And let’s not go there with the girls-can’t-throw blah blah. Unless, of course, Dame Valerie Adams is up for a chat, in which case, I’m all ears.

It’s possible that all I’m lacking is a mere 9999 hours of throwing practice, if Malcolm Gladwell’s 10,000 hours theory is anything to go by. “Ten thousand hours is the magic number of greatness.” The dog would love that: 10,000 hours at the lake chasing sticks. Someone else would have to be in charge of dinner though, I’d be too busy practising throwing and not causing injury. Thai curry sounds nice. We’re out of coconut milk though.