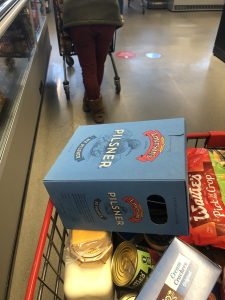 Isn’t it quiet? Virtually the only sound to be heard yesterday afternoon was my husband swearing at the line trimmer that he couldn’t get to work. The swearing eventually stopped, the whizzer never did fire up and I went back to reading my book in peace. There’s a difference of opinion as to whether, or not, this was a good outcome.

The dog is getting used to the increase in foot traffic in front of our house and no longer feels the need to meet and greet every single passerby. The enthusiastic barking has died down for now, but he might have a bit to say when he finds out I’m planning to give him a bath. That’s a job for Monday or Tuesday next week when the weather looks a bit warmer.

Because now’s the time to get some jobs done. I’m hoping today’s the day the guy finally comes to fix the toilet. The ‘guy’ is my husband, the handy builder (which I do know is different to being a plumber) and he only has to come from the lounge. We’re not breaking any rules, don’t worry, and he might as well do it since the line trimmer isn’t working.

My next job is a trip to the supermarket. Which is more of a mega-mission than a job. I’d forgotten some of the rules like not being able to take your bags in and packing all your groceries back out in the carpark. I’m just glad it’s not raining. I have been making a list so I can zoom around rather than employing my usual method of dawdling along waiting for dinner inspiration to strike, which it never does anyway.

The family have added saveloys to my shopping list which is proof that the world has gone mad. They should know I will never buy saveloys. I’m just going to tell them the panic-shoppers bought them all. They’re probably hoping I go in to panic mode the minute I walk through the doors and don’t remember anything except saveloys. To be fair, I did have a bit of a panic the last time I went and found myself grabbing handfuls of carrots which was weird because I was under strict instructions to buy beer. I didn’t go anywhere near the toilet paper, I swear.

I have a question about that, actually. What happens when you do really run out of loo roll? Do you need a permission slip from Jacinda before you can buy more? Or do you just make a big sign saying I’m not a hoarder. I guess you just have to turn a blind eye to the disapproving looks. Same as turning a blind eye to the disapproving looks you get for doing rubbish parking in the supermarket carpark. Or is there a Facebook page where you get reported for that, too?

I’ve been putting off going shopping for a few days and running down existing supplies in the meantime. It’s been approximately 15 months since I last cleaned out the pantry (around about the same amount of time since I last reorganised my bookshelf, learnt to play Bananagrams or did a burpee) so now’s a good time to do it again, I suppose. The shelves are pretty much bare apart from all the bags of bulgur wheat Nadia sent in the Foodbag and which everyone refused to eat after the first time.

I’m just hoping we don’t get to the stage where I’m forced to clean the oven. If it comes to that we may well end up having boiled saveloys for dinner.