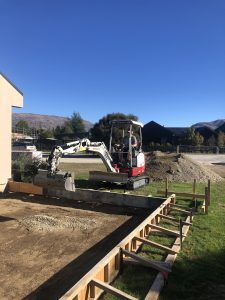 I’ve been baking again. My second ever bacon and egg pie and a pretty tasty apple pie. No prizes this time around, though, because while I was making pies my husband was making a house, so top honours go to him.

Not a whole house, an extension to our existing house. The concrete slab is down and this weekend the frames went up so now it looks a whole lot more house-like. I can now stand on the slab and imagine what my new room will look like when it’s finished. I think my husband, the builder, stands on the slab and imagines a quiet life where he never agreed to start this project. He did at least get homemade bacon and egg pie at smoko so that’s one good thing.

Prize-winning or not, I am quite pleased with how this baking lark is going so far. My friend Jane says I can now officially call myself a baker. I think it’s too soon and probably a bit pretentious for someone who only has three pies to her name. There’s been a big serving of beginner’s luck in my efforts, and I don’t want to jinx that.

Jane is a baker, though, so this is a big compliment. The Elmo cake she made for my daughter’s fourth birthday is still considered the best our family has ever known. I was always too scared to make the kids’ birthday cakes. Apart from that one time when a power cut meant the fancy one I’d ordered from the cake shop didn’t get made in time and I was forced to step up last minute with a very underwhelming, slightly flat, packet mix job decorated with a lot of sprinkles in a desperate attempt to jazz it up.

Jane learnt to bake as a chalet girl in the French Alps back in the nineties. I also worked for a chalet company but I was a nanny so I was more focused on making snowmen, which has turned out to be a slightly less useful skill in the long run.

It’s not actually true to say that I’ve never baked before now. I’ve been making a very decent banana cake for the last 20 years. The recipe came from one of the chalet staff, as it happens, and I still have the piece of paper I wrote it on decades ago. It would be a disaster if I ever lost that piece of paper because I don’t have the recipe recorded anywhere else. You’d think I’d have digitalized it somehow, even just with a photo on my phone, but I never have. I think a part of me enjoys the nostalgia of a handwritten recipe from a time in my life when I got paid to make snowmen.

My husband, the builder, shares my nostalgia for the French Alps in the 1990s. People paid him to take them skiing in those days. Now he’s providing unpaid labour because his wife wanted a bigger house. It doesn’t always pay to have useful skills, evidently.