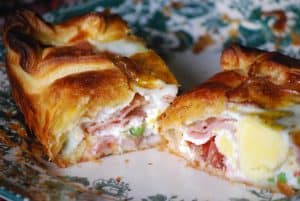 Exciting news! My daughter’s team won their volleyball championships! And I won the bacon and egg pie making competition. Thanks, I know, it’s quite the achievement.

Nobody else knew there was pie making competition on (too focused on the volleyball) but there was, and I won. I know I won because my daughter messaged me: “Bacon and egg pie all gone. It was immaculate.” Immaculate! I love that kid.

So, the thing was, it was the first time I’d ever made a bacon and egg pie. Yeah, yeah, enough with the shocked faces. I’m not from around here, ok. I could be wrong, but I think bacon and egg pie is more of a Kiwi thing. A sacrosanct Kiwi thing.  It’s not a thing from my 1970s childhood in the south east of England anyway.

I would never even have gone there with the whole pie thing except there was an email, and a list. From the team manager, about who was providing what, and I was down for the pie. Noooo, can I please swap for the two cooked chickens, I pleaded (in my own head). But no, the pie was clearly detailed beside my daughter’s name and so I was making it. (Come to think of it, why wasn’t she making it? Anyway, too late for that now.)

As any teenager will tell you, a parent’s KPI is: do not embarrass me. To be honest, it’s a hard target to reach and success is neither guaranteed not particularly common. However, we do try. And in my case, on this occasion, this translated to: do not make a crap bacon and egg pie. The kind of pie that everyone else’s parents can whip up with their eyes closed, any day of the week, completely from memory whilst simultaneously reciting the rules of rugby. (I’m ok when it comes to the rules of rugby as it happens.)

Back when I had a serious job, writing about serious things like talented athletes winning real medals (not made-up ones to do with pies), I worked alongside a brilliant High Performance Director. His parting words as our athletes and coaches headed into a competition were always: “Just don’t f**k it up.” Simple.

I had these words in my head as I was standing at the kitchen bench with my Edmond’s cookbook. I’m not going to lie; I was scared.

As well as Edmond’s I also had open about 55 different tabs on my laptop all detailing slightly different versions of pie recipes. Minefield. Peas or no peas? Tomatoes? Is shop-bought frozen pastry ok, or totally against the law? Will they take back my New Zealand passport if I fail this test?

In the end I bit the bullet and went for cheats’ pastry, a dozen eggs, a packet of bacon, onions, half a cup of peas (shush, I’m a fan of veg), and some cream. The team ate the whole lot and then they won the competition. I’m tying those two events firmly together.

Not quite sure what’s become of my medal though. Must still be in the post. Meanwhile, the daughter’s off to another volleyball competition this weekend and I’m on Greek salad. Wish us luck.