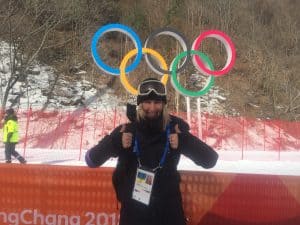 It was options evening at school this week; the school gym filled with (mostly) enthusiastic-looking students and their anxious-looking parents. Why do the parents always look so worried? As though we’ve convinced ourselves that our children’s future happiness rests entirely on making a choice between PE or history at the age of 16. The students seem less concerned. The decision-making will likely come down to what their mates are doing and whether, or not, they like the teacher. And you know what, that’s fine. It will be fine. I want to go back in time and tell my 16-year-old self, it will be fine.

Once upon a time I had to choose between taking a typing course or learning Spanish. I flat out refused to learn to type since I wasn’t going to be anyone’s secretary. Stupid. Also, arrogant and short-sighted. Anyway, I never learnt to touch type. Here’s the funny thing though, thirty years later I made it to the Olympics… for typing.

I’m making myself sound more accomplished than I am. I’m not an athlete by any stretch of the imagination and I certainly didn’t earn myself a medal, but I was at the Olympics and my main activity whilst there was typing. Press releases. A lot of press releases. About real athletes and their really fabulous achievements. I was breaking the news and it needed to happen fast. Being able to touch type would have been handy but not being able to do it wasn’t a deal breaker. I’d learnt to type (ish – with two to three fingers) later and, in the meantime, I could also order a beer in Spanish whilst on my OE in Mexico. My point being, we can, and do, spend our entire lives learning new skills so please tell your 16-year-old self not to stress.

Talking of new skills, at 46 years old I’ve discovered that I enjoy chopping wood. I should have learned this 22 years ago when I first arrived in New Zealand and found that small wood burners were what Kiwis called heating. Lies. I knew it the first time I saw it: that thing was never going to heat an entire house. It didn’t. Doesn’t. Everybody knew it but for some reason denied it, along with the benefits of double glazing.

I had never chopped firewood before. We had radiators back where I come from, and I was never in the girl guides. Besides, I’m quite clumsy so the idea of me wielding an axe seemed ridiculous. So, I spent two decades not chopping wood. (Also not mowing the lawn or barbecuing but that’s a different story.) Until last winter when, for reasons unknown, I decided to give it a go. In secret, because I was pretty sure I was going to be useless and wanted to avoid the embarrassment of being seen, but close enough to the house that I could be found if, for example, I did chop my leg off.

It was a bit hit and miss (literally), but I managed to come back with an armful of kindling along with both my legs. So, I kept going and somewhere along the line I’ve come to quite enjoy my daily wood chopping ritual. I’m still not great at it but I’ve learnt a few tricks now. Like, when you swing the axe and it gets stuck just a couple of centimetres in but doesn’t actually split the wood, you can just pick the whole thing up again and keep whacking it until it does actually split. This is quite a good thing to do if you’ve been having a bad day but first you must make sure that the dog is nowhere nearby and still keep watching out for your legs. Sounds dangerous, right? We probably should just have got radiators…

It turns out that wood chopping is one of those relaxing activities where you find yourself with time to think (whilst still focusing intently on the dangers at hand, obviously.) So, a few days ago, whilst out chopping the wood I was thinking how unpredictable life is and you never quite know where you’re going to end up and what you will be able to achieve. Somehow, I ended up getting paid for my typing skills and chopping wood as a leisure activity. My sixteen-year-old self never saw that coming and wouldn’t have believed it anyway.