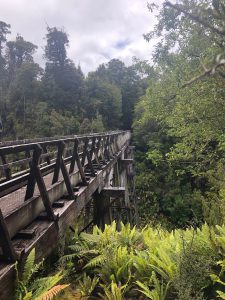 Adventures from the Hump Ridge Track

It’s on day two as I’m standing in a sea of mud that I really start to question whether I’m going to make it through this ‘adventure’ unscathed. Last time I did anything like this I was wearing a tutu. This time I’ve swapped the tutu for walking poles. Wise move, all things considered.

I’m on the Hump Ridge Track in Fiordland National Park, a part of the world often described as ‘spectacular’. It’s true, it really is, but at this particular point in time the only spectacle I’m concerned about is me ending up face first in the mud.

The walking poles are a lifesaver. Right now, I can’t imagine life without them, quite frankly. At last night’s briefing, Lodge Manager Anthony had some helpful advice around the use of walking poles and mud: one not two was the way to go he assured us. Most people don’t know how to use two at a time and just end up flailing around like a crazy octopus, says Anthony. Well, call me the crazy octopus lady but I need all the extra limbs I can muster for balance as I wade, skid and hop through this bog.

The Hump Ridge Track: the clues are in the name. There are humps alright, great big mountainous (muddy) ones. By the time I get home from this mission my calf muscles will have seized up in protest. What the hell were you thinking, get back on that couch immediately, they will cry for days after.

And ridges, there are also ridges. Apparently, they come with views but when I finally conquer the humps at the end of day one and emerge on to said ridge, I find that those spectacular views have been stolen by the sideways rain. No matter, what I do spy through the mist is Okaka Lodge, a welcome refuge after 20kms and 7 hours of walking on day one of my three-day quest.

My quest! Lols. I’ve started to imagine myself as a character in the Lord of the Rings. This is what seven hours alone in the (muddy) wilderness will do to your mind. There are 43 of us out here on this section of track (thankfully no orcs even though this looks a lot like a goblin forest). We’ll all hunker down together at the end of the night to listen to each other snore and clamber in and out of our bunk beds for stealthy trips to the loo, but by day sightings of fellow walkers are few and far between.

I’m an hour and a half in on day one before I hear a faint rustle behind me and someone comes running past me. Running! It’s my first assurance that I’m not completely alone out here, or going the wrong way, but apparently there’s no time for a friendly chat, no time to bond. Running boy is gone in a flash. Later I find out this is Oscar. He’s here with his dad. “We’re meant to be walking together,” he tells me. Dad is nowhere in sight. “It’s better for everyone if we just go at our own pace,” Oscar’s dad tells me at the end of day two.

There are a few family units tackling this walk together (or not). A mum and son duo are hot on Oscar’s heels and round out the podium second and third over the finish line every day. Don’t tell me it’s not a race. It obviously is and we all secretly have what my new mates Ken and Barb from Dunedin have termed FOBO: Fear of Being Overtaken. I notice that Mum and Son not only have walking poles but gaiters. Clearly these are their secret weapon. An extra layer of defense against the mud. Like a superhero cape for your feet.

I feel like Stressed Out Mum could do with a superhero cape or two. She’s one of the last to arrive at the end of day one, part of a group of 12 or so parents and kids. The youngest is about 10 and let’s just say day one hasn’t gone great for him, and therefore his mum. “It’s harder than we expected,” she tells me later. At this point it looks like nothing less than a superhero cape will get the poor young guy back out on the trail come tomorrow. Unfortunately, we’re a little short on capes, or much else for that matter. Our packs, due to be flown in by helicopter (don’t judge me, you’d do the same) haven’t made it. Sideways rain, fog, no view etc.

I’m feeling a little smug. I packed a change of clothes, my toothbrush and some extra snacks in my day pack. It was in the fine print that this might happen, people. I choose not to mention this though. Better to make friends not enemies out here in the bush.

Dinner time. Last time I did anything like this I was wearing a tutu AND being served three course meals cooked by an actual chef. This time I’m pouring two cups of boiling water into a packet of freeze dried spag bol and hoping it’s somewhat edible. It is, surprisingly. Anyway, the gin and tonic help wash it down. The food options may be somewhat limited, but the bar (more of a cupboard) is well stocked with some very nice wine, beer and G&T. This is tramping Kiwi style and I like it.

Day two starts out well: no rain and I’m heading down the humps not up. But did I mention the mud? It’s another seven-hour day and I spend the first three in full octopus mode on the longest mud slide in the world, occasionally wrapping myself around a tree so I can take a breather. Somehow, I do, in fact, make it out unscathed.

The next section is flat as the track crosses some impressive wooden viaducts and follows an old logging tramway. I’ve gone from Lord of the Rings to Standby Me.

“Don’t keep staring ahead wondering where the end is, you’ll never get there,” was Anthony’s second piece of helpful advice at last night’s briefing. Luckily, I’m too busy trying not to trip over the tram tracks to spend much time looking ahead so presumably I will arrive at my destination at some point. Sure enough Port Craig Lodge does eventually emerge out of the bush along with the promise of a cup of tea and a hot shower.

The packs have also arrived – good news! Or not. Now I have to carry the damn thing. Apart from a spare pair of shoes for walking around the lodge and trips to the loo, turns out there’s nothing in there I really need. (I’d like to think this will be a lesson in how to pack light but I already know my future self will choose to forget this.)

The rest of the crew have all made it safe and sound and even Stressed Out Mum is looking a little more relaxed. Oscar’s dad is excited to report that there are dolphins in the bay for those who can entertain the idea of a 10-minute walk down to the beach. (There’s a hill, I’m not going.) He’s upbeat, Oscar has promised to walk with him for the last day. With Oscar restricted to walking pace only Mum and Son are set to take the lead tomorrow. Gaiters are washed, dried and at the ready.

Night two follows a familiar pattern: G&T, freeze dried beef curry (I preferred the spag bol), a glass of wine with Ken and Barb, more snoring in the bunk rooms.

20km long, the final day is estimated to take 5 – 7 hours of walking. I prefer the five-hour version, although the heavier pack is going to slow me down somewhat. I opt for an earlyish start.

The last two hours cover familiar ground as the route follows the track in the opposite direction back to the start. I know what’s ahead: steps. Easy peasy stairs on day one when you’re only half an hour into your mission. Enormous great cliffs when you’re half an hour from the finish with 59kms under your belt. My walking poles become crutches as I drag myself up at a pitifully slow pace. When I finally make it to the top of the stairs I have to stop for a rest. I’m minutes from the finish and fantasizing about crossing the line. Will there be balloons and streamers, maybe a brass band there to greet me? I really am losing my mind. There is no ‘finish line’, just a car park. And my family there to greet me. Way better than a brass band. Best hugs ever.